Take a day or weekend to check out these awesome roadside attractions!  Every corner of the region offers something to woo travellers in pursuit of a selfie with an oddity of magnificent proportions.  Get creative with your selfies – you could be holding the World’s Largest Egg or taking a bite out of the World’s Largest Pyrogy!

A 27-foot pyrogy will have you wanting to stop in at the pyrogy restaurant next door to sample the popular Ukrainian dumpling. Not to worry, they are much smaller than the 6,000-pound statue! 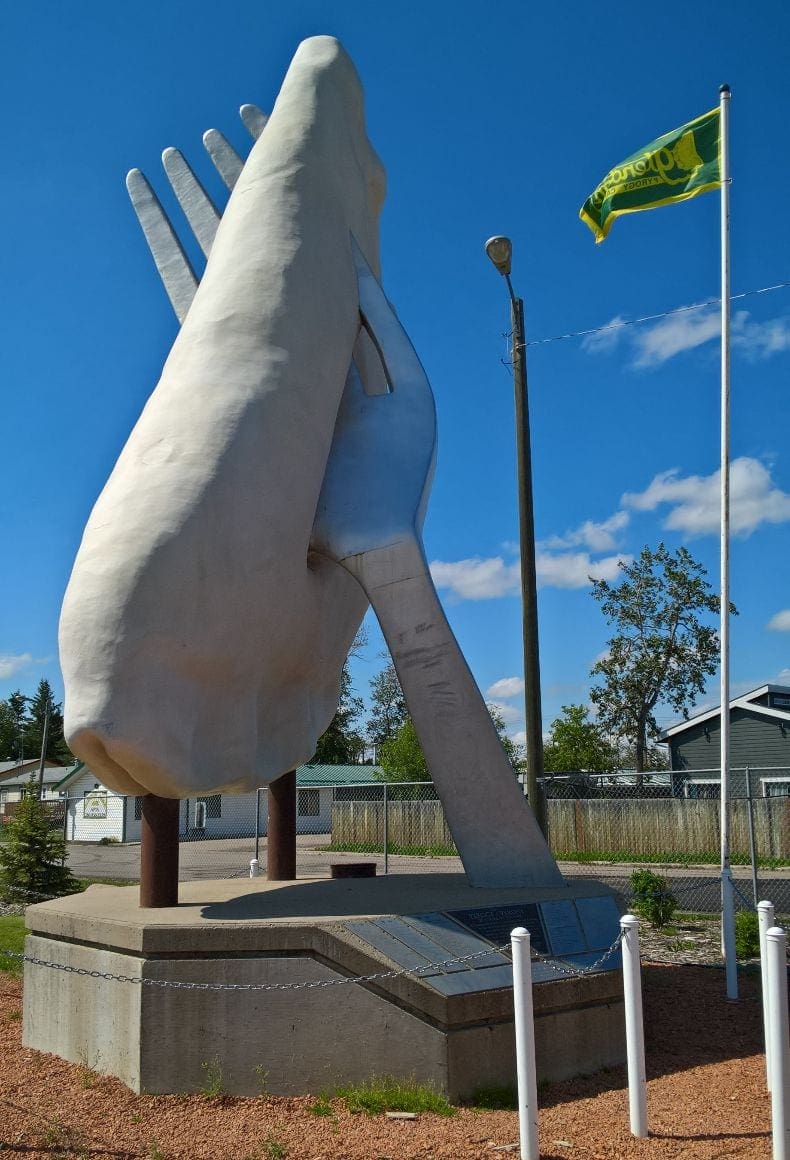 Find more information about the Village of Glendon.

No, you’re not in Wonderland.  You’re in Mushroom Park, the site of the World’s Largest Mushrooms. Check out this replica of the Tricholoma upscale mushroom, a mushroom that grows in the area and is often used dried or cooked as a traditional ingredient in the ethnic dishes of the region. Find more information about the Village of Vilna.

A 7-meter tall wood-carved statue of Angus Shaw stands as a reminder of Shaw’s contribution to the fur trade in Western Canada at the Bonnyville & District Museum. Angus Shaw was the first European to come to the area in the mid-1700s. 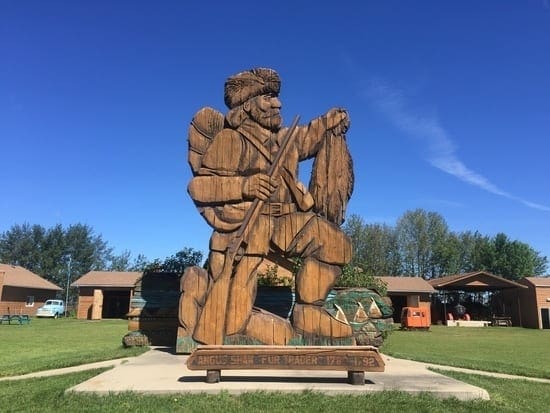 Find more information about the Town of Bonnyville.

Right in downtown Smoky Lake, the Pumpkin Park boasts 7 huge pumpkins!  The town has a Pumpkin festival every year to celebrate all things pumpkin including a Largest Pumpkin Weigh-off.  Be sure to go see the impressive giants! Find more information about the Town of Smoky Lake.

A tribute to the original 20 members of the Northwest Mounted Police, who travelled down the Victoria Trail to Fort Edmonton to fulfill the vision of a nation-wide police force, is located near Waskatenau.  It is 12 feet wide, 14.5 feet tall and is plated in 1-inch thick steel.  You won’t be disappointed when you stop here. Find more information about the Village of Waskatenau

In the centre of a traffic circle in Lac La Biche, a swirling steel feather soars nine metres into the sky.  The towering sculpture of a steel feather outside the Bold Centre may be the largest feather sculpture in Alberta. This sculpture and the 16 other smaller silhouettes that surround it were built to represent the region’s numerous Indigenous populations and Cultures. Come and admire the 37 murals in Legal that are painted on the walls of the buildings on almost every corner in town.  While visiting the “French Mural Capital of Canada” you’ll learn about the history, events and challenges of the francophone families, the organizations and the religious communities.

Find more information about the Town of Legal.

This 12-foot long statue was built to commemorate Lac La Biche’s bicentennial and to recognize Thompson’s landing on the shores of Lac La Biche.  Stop by the monument to learn all about Thompson’s accomplishments as an explorer and mapmaker. Redwater is home to the world’s largest free-standing oil derrick.  The 45-meter tall frame is red in colour and has a 6-foot long pulley known as a travelling block with the lifting hook hanging in its centre.  It is sure to impress you! Find more information about the Town of Redwater.

Have you ever wondered what a 1-tonne mallard duck with a wingspan of 23-feet would look like?  Head over to Andrew and see for yourself.  The majestic duck was erected in 1992 as a commemorative quack to the duck breeding grounds of the local wetlands. Find more information about the Village of Andrew.

This tribute to the Stawnichy family stands 42 feet and was built to mark the home of the best Ukrainian sausage.  Make sure to head down the street to give it a try!  The Stawnichy’s Meat Processing Plant has been operating in Mundare for over 60 years. Find more information about the Town of Mundare.

The world’s largest Pysanka, or Easter egg, can be found in Vegreville.  It stands 31 feet tall, is 18 feet wide and weighs 5,000 pounds.  It symbolizes Vegreville’s rich Ukrainian culture and the peace and security the RCMP offered the pioneers and their descendants.

Find more information about the Town of Vegreville.

Take a day or a weekend to go and explore Lamont County’s beautiful countryside and fascinating history, as you discover each historical gem on your tour.  The county is home to over 40 churches and has more churches per capita than anywhere else in North America! Unique & One-of-a-Kind- The Bison in Wainwright

Of course, the bison capital of Canada would have a giant bison statue!  Deemed the largest in Canada, it’s sure to impress.  Stop in and take a photo with this fabulous beast! Anchored in the centre of downtown Wainwright, is the free-standing Memorial Clock Tower.  This “Roman Tower” architectural monument was built in 1925 to commemorate those who died in the First and Second World Wars.  It was the only structure still standing after the Great fire of 1929. Find more information about the Town of Wainwright.

A beautiful old trestle bridge that spans 2,775 feet across the valley of the Battle River and is 195 feet tall is a must-see!  This bridge is the second-longest bridge in all of Alberta! Find more information about the Town of Wainwright.

Grab your mask and get started on your epic roadtrip to see these awesome attractions! Please practice social distancing when necessary and keep our communities safe. No event found!
Load More
Change Location
Find awesome listings near you!
Get Great New Content as We Release it. Enable Notifications.    OK No thanks